Kings River uses Character Counts!, a character education framework that is used nation-wide. Good character is necessary to successfully and honorably meet life’s challenges. The Character Counts! approach to character education doesn’t exclude anyone. That’s why the programs and materials are based on the six ethical values that everyone can agree on – values that are not political, religious, or culturally biased. Each month, Kings River staff and students focus on one of six pillars of character.

What is Character Counts?

Founded by Michael Josephson, Character Counts is a nationwide character education program administered by Josephson Institute and the Center for Youth Ethics. Character Counts leaders, also known as coaches, instill the programs importance in everything they do. For learning in the classroom, the honor above all, addresses academic honesty. Students focus on trustworthiness and fairness as guiding pillars in their academic learning.

Kings River School actively supports Character Counts and the Six Pillars of Character: trustworthiness, respect, responsibility, fairness, caring, and citizenship. The six pillars are the foundation for showing good character from the time a student rides a school bus, to learning in a classroom, eating lunch, and interacting with others. The six pillars of character have become part of the language among students and staff, and students are encouraged and recognized for showing good character. Banners, murals and posters are displayed throughout the campus. The Character Counts framework is not only visible through displays, but more importantly, it is evident in how students and staff respectfully treat each other every day.

The Six Pillars of Character

I pledge to be a kid of Character.
I will be worthy of trust.
I will be respectful and responsible, doing what I must.
I will act with fairness.
I will show that I care.
I will be a good citizen and always do my share. 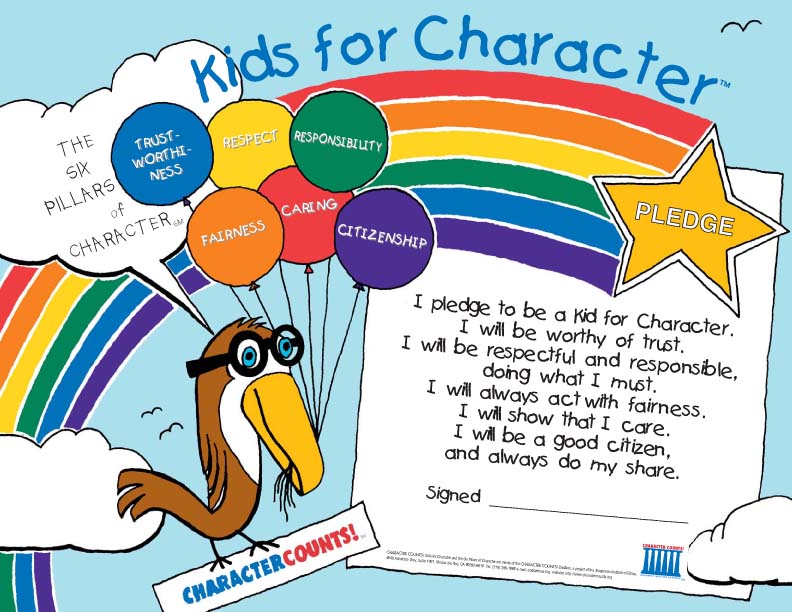