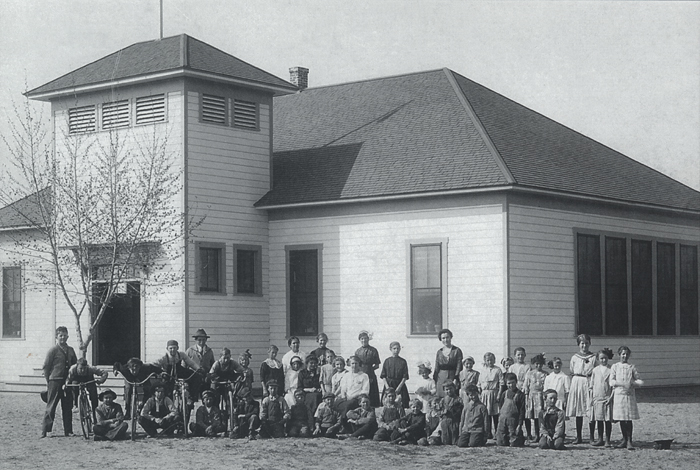 The Kings River School District was formed in 1908 when residents complained that their children had to go long distances to attend Kennedy School. The Tulare County Superintendent of Schools turned down a request for a district in 1905 when a census showed that there were only 15 children of school age living here. More people moved in each year and by 1907, there were 40 children in the proposed school district and permission was granted to bond the area and build a school house. The efforts to form the Kings River School District was led by R.C. Smith, who was reported to have ridden his bicycle to Visalia to carry a petition for formation of a district. The original district contained less than five sections of land and was the smallest in Tulare County.

The school opened officially in September of 1908 with Miss Tillas as the teacher for 40 pupils. The first Board of Trustees included R.C. Smith, Swan Johnson, and C.O. Peterson.

There were two graduates from the 8th grade the first year. Wallace Smith, son of R.C. Smith and Edith Pierson. This was the Wallace Smith who taught California History at Fresno State University and authored books related to the history of the San Joaquin Valley. Probably the most noted of his books was Garden of the Sun which contained a history of the San Joaquin Valley.

On April 4, 1913, an election was held to vote a special tax to raise $1,000 to build an addition to the Kings River School building. The new addition cost $1,094 and was completed in time for the opening of school in September 1913.

On December 18, 1930, an election was held on the question of consolidating with Kennedy School District. The election passed by a large majority and the name of the new school district was decided to be Kings River Union School District. The Kennedy School Building was moved to the Kings River site in 1931. School opened in September of 1931 with Frances Engvall as the Principal/Teacher.

By 1950, the number of pupils had increased to 250 so ground was acquired across the street from the school for a new modern school facility consisting of 10 classrooms and a multi-purpose room.

The enrollment continued to grow so that in the early 60’s, plans were begun to construct additional classroom facilities. A new wing with 6 classrooms was completed in 1965 and was put into use for the 1965-66 school year.

During the 2002-2003 school year Kings River School began modernization on one of it’s primary wings. In addition to modernization of 5 classrooms, 1 computer lab and 2 restrooms, the school also began construction on a new school parking lot, a student drop off zone and a school bus loading area.

During the 2007-2008 school year, a new multipurpose building was built.

During 2009, construction began once again to build a 3 classroom wing.